It’s Friday, and I’m off, thank goodness (our office is always closed on Friday’s). Greg works rotating shifts, which can be tough and is why I am happy to work 4 days a week. He’s working this weekend, so I plan to entertain a very energetic toddler. We might head to the library; we haven’t been to the local one since we moved.

House stuff: We finally got the downstairs of our house mostly decorated. I think Ellie has at least as much furniture as we do – a table and chair, a mini workshop that used to be Greg’s as a kid, a play kitchen, an armchair, and a rocking horse. So basically, half our downstairs is owned by a tiny toddler and it’s like one big playroom. I’m okay with that.

We decorated above the couch with these posters from NASA. We just had to print them and order frames.

I think next up for house decor might be our bedroom, because it is fairly empty right now and it’s a big room. I’d rather have had a bigger bathroom; not sure yet what to do with the bedroom space. There’s no rush on figuring it out, though. It might not even be till next year, since we are still getting a feel for our budget.

Going outdoors: It went straight from cool to HOT here, which I think is happening in a lot of places. It’s been humid with the tropical storms that have been coming through south of us.

Ellie would live outdoors if she could. She is always demanding we go outside. She’s actually always demanding a lot of things. It’s like living with a tiny dictator. I await her instructions. Often, while I’m sitting, she pokes me and says, “Up! Up!” which means I need to follow her. 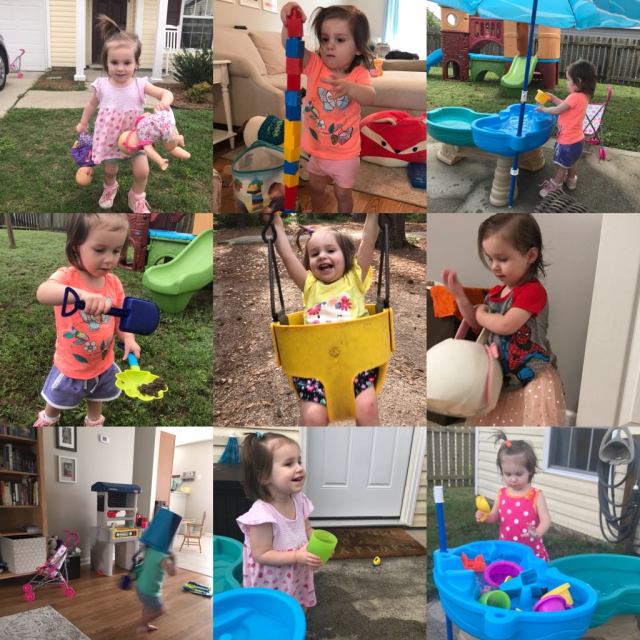 She’s been enjoying the water table and playing in the dirt, although she does NOT like getting a mess on her and will wash it off right away. She has two baby dolls that MUST go with us everywhere, even in the backyard. Usually, I am the designated holder of the babies.

She doesn’t have a ton of words yet; she has figured out the word ‘no’ for sure. She says it gently and thoughtfully. If I ask her, “Do you want to take your blankie off?” (it’s a sleep sack), I usually hear a small “…..no.” She has been learning more and more words in the last couple months – it’s amazing.

Watching: I have been watching a few different shows. I finished up the first two seasons of Fargo and ran out of episodes on Hulu. That show is wild – extremely violent and cinematic. I’m not a fan of violent shows but it hooked me – it’s also weird and funny.

Then I watched the first season of Legion, another weird and cool show. It made me want to see some other Dan Stevens stuff, so maybe I’ll give Downton Abbey another shot.

I just started watching The Handmaid’s Tale. I watched the first episode and that was rough. After I finished, I felt like I just watched my nightmare. But it’s a good show and I’m going to continue it. 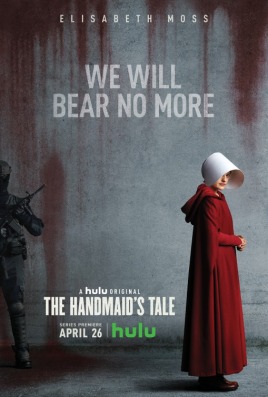 Reading: I’m finishing up Caliban’s War (Expanse #2) by James S.A. Corey. I’m not usually a sci-fi book fan and I’m digging it. I got into it because of the show and it follows the book pretty closely. I’ll probably take a break from the series after this to read something else on my shelf. I read that the series got canceled by Syfy and then picked up by Amazon, so hooray! I’ve seen the first two seasons and will catch up sometime.

Hope you’re having a good Friday and enjoy whatever you have planned this weekend!

Ready for adventure! A short walk around our neighborhood.
My tulips are blooming! Disclaimer: fake butterfly!
The outfit choices lately are unbeatable. #threeyearsold
Trains are the best part of the zoo. #threeyearsold
Matching buds
“It’s pajama day?” “For you, it is.”