This is one of my favorite days of the month, because it makes me want to read all the books everyone’s been recommending. I actually read a few this month that had been recommended by others.

Shotgun Lovesongs by Nickolas Butler – 3.5 stars
I liked this, even though I didn’t realize when I checked it out that it switched perspectives between characters. I usually have trouble staying interested when books do that. I liked most of the characters, and I enjoyed Beth’s perspective the most. It was a good book about friendships, love, and small towns.

The Husband’s Secret by Liane Moriarty – 4 stars
This was the first book I’ve read by this author, and I liked it. I’m not usually a fan of chick lit type literature, or whatever you would call this genre, but since it has been recommended so many times, I gave it a try. It didn’t have me riveted the whole time, but I enjoyed it enough I may try another of her books some time. It was an interesting look at characters’ stories interweaving with each other.

The Neverland Wars by Audrey Greathouse – 3 stars
I received a copy of this book from NetGalley in exchange for an honest review.

I was kind of meh on this one, because it never really took off. It seemed like it would be about the wars between Neverland and the real world, but there wasn’t much of it going on and it felt like could have been a series. Instead, it was one book and I don’t think it ever got a foothold for me, because the plot was a little lacking.

The Girl in 6E by A.R. Torre – 3.5 stars
This is a thriller about a girl who webcams full time from her apartment, but also is secretly hiding her urge to murder. It’s kind of like Dexter, except with lots more sexual descriptions and if Dexter had the killing skills of a bunny rabbit. She’s like a hamster that really wants to eat you, but is clearly lacking the size. The main character accidentally uncovers a crime and attempts to stop it. It wasn’t the best thriller I’ve read, but it was a quick read if you don’t mind lots of sexy cam descriptions. 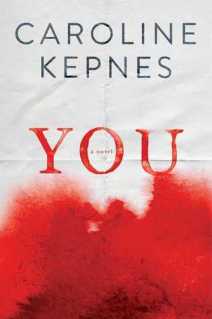 You by Caroline Kepnes – 3 stars
I have heard about this book so many times, but it also wasn’t what I expected by the time I finally read it. I actually expected it to be MORE graphic from the reactions I had read of it. It was more of a slow creepy feeling. I thought the author did a good job with Joe’s personality and describing his thoughts, but at the same time I wasn’t really surprised by much in the story.

I wasn’t wow-ed by anything I read this month, but I didn’t read anything that was terrible. I’m currently reading a book that I’m really enjoying, so next month may bring some books I love.

As always, feel free to add me as a friend on Goodreads so I can see what other people are up to throughout the month!

I’m linking up with Steph and Jana today for Show Us Your Books.

29 thoughts on “What I’ve Been Reading”